Home VEDay7575 Years of Liberation in the Netherlands

75 Years of Liberation in the Netherlands

Reflections of a Canadian Soldier

As we approach Remembrance and Liberation Day in The Netherlands on the 4th and 5th of May respectively, we find humanity embroiled in another global battle, the battle against COVID-19. To that end, while we are all preoccupied with doing our part to defeat this dreadful virus, we will solemnly remember the victims of wartime violence and celebrate the 75th liberation of The Netherlands in a manner no one would have imagined a few short weeks ago. Canada has a long and very close relationship with The Netherlands. The onslaught of the Corona virus has led to the postponement of nearly 80 of the over 140 commemorative events that Canada was supporting over the period of the 75th Anniversary. It also impacted 33 Canadian groups that were planning to take part in those celebrations. As we take time for reflection on the Dutch Remembrance and Liberation Days this May, on behalf of all Canadians, I would like to thank The Netherlands for the manner in which they continue to honour and respect Canada’s fallen soldiers, sailors, and aviators – You are the guardians of Canada’s war dead.

There are 5,712 Canadian Forces service members buried in 199 cemeteries in The Netherlands. This figure includes 55 service personnel from First Nations communities and 14 from Newfoundland. The large majority of these personnel are buried in three Commonwealth War Cemeteries in Bergen op Zoom, Holten, and Groesbeek. The other 196 cemeteries are dispersed throughout the country, amongst local communities where the majority are aviators who are laid to rest in close proximity to where their aircraft were brought down. To the average Canadian, the bespoke manner in which Dutch people honour our war dead is something to behold. The entire nation in one way, shape, or form is engaged in the act of remembrance.

It is simply impossible to name every Dutch group or activity that is involved with commemorating Canada’s contribution to the liberation of The Netherlands. Nevertheless, the ingenuity behind how Dutch communities, the caretakers of our fallen, recognize the sacrifices Canadians have made for their freedom is nothing short of incredible. The scope of the activities range from organizations that span the whole country to smaller, local groups that are entirely dedicated to specific events that happened in their own communities. There are festivals, museums, marching bands, re-enactors, commemorative events, and many imaginative projects. Furthermore, families and individuals become involved in some capacity. Whether it is sponsoring a Canadian Veteran in their home when they come to visit their lost comrades, attending a commemoration, bloemenkinderen (flower children) laying flowers on graves, or placing a candle on a grave on Christmas Eve, there is some way everyone can contribute. Even the world renowned 4 Daagse – Fours Days March in Nijmegen pays a tribute to Canada’s and other nations fallen during the event. In short, at every level from families to the National 4-5 May Committee, the value of freedom is woven into the very fabric of every Dutch citizen.

Freedom is one of the cornerstones that defines the national identity of both Canada and the Netherlands. In fact, freedom is so important to our identities that it is cited in the lyrics of both national anthems – O Canada and Wilhelmus, which also happens to be the oldest national anthem in the world. There is however a nuance to how freedom is regarded in both countries, which can be seen in the manner in which the Dutch celebrate and commemorate freedom, and why Canadians flock to The Netherlands to participate in those events. In particular, since Confederation in 1867, Canada has not experienced a direct threat to its sovereignty in the same manner as The Netherlands had in World War 2. Canadians have not had to directly endure the hardship and devastation of fighting to regain freedom on Canadian soil. Moreover, Canada has always supported the fight against tyranny by sending its armed forces to foreign lands. As such, to fully understand the value of freedom and the struggle and sacrifices made to regain it, Canadians go to Europe and other far-off lands. They particularly come to The Netherlands to talk to people, to walk the battlefields, and to see first-hand the Canadian soldiers’ graves to learn and comprehend the destruction and impact that the Second World War had to preserve freedom. This important point is a key tenant ingrained in Dutch culture, and whether attending a commemoration, or a festival, the impact of the war still to this day, has a real bearing on Dutch people, as the value of freedom has never been taken for granted.

In recent times, the number of veterans and civilians that experienced the perils and recounted the hard lessons of the Second World War have begun to dwindle. People have started to speculate on how the liberation of The Netherlands will be commemorated once they have all passed. Veterans themselves perhaps express it best through the lyrics of a Bing Crosby song, “Old soldiers never die, they just fade away.” World War Two veterans are being replaced by younger generations, all who have served in the same regiments as their forefathers. Numerous groups of these veterans were poised to come to The Netherlands this May, as they too come to be reminded of the impacts of war and pay tribute to their brothers in arms.

While veterans are a catalyst to remembrance, the future actually rests with our younger generations. The power of youth cannot be underestimated as Dutch high school students have led commemorative events in Canadian War Cemeteries for their visiting Canadian high school guests. The hard lessons of war are not lost on Dutch youth and it is truly inspirational to see them share their understanding of freedom with their foreign friends. Before the effects of COVID-19 led to the postponement of this year’s celebrations, there were over 2,200 Canadian school children planning to join the remembrance and liberation ceremonies this spring.

While every commemoration honouring Canada’s World War 2 service personnel is steadfastly attended by members of the Royal Netherlands Armed Forces, the Canadian Armed Forces also pays tribute to Dutch service personnel who lost their lives in service of their country. For example, each year on the 4th of May, the Canadian Armed Forces participates in the Royal Netherlands Air Force remembrance parade at Memorial Square – the Obelisk, at Soesterberg Air Base. During this parade a special tribute is made to all Dutch aircrew that lost their lives in the previous calendar year.

The Canadian Armed Forces also pays tribute to the Dutch resistance from World War 2 at the Prins Bernhard Stoottroepen commemoration. This unique Infantry Regiment was formed by Prins Bernhard in 1944 from a group of resistance fighters. The Canadian Armed Forces has even attended a joint memorial in Hoogkerk, where both nations honoured two Canadian infantrymen that fell in the Battle of Groningen, the aircrew of an allied bomber, and a Dutch Mortarman serving with 13 Infanteriebataljon, 11 Luchtmobiele Brigade of the Royal Netherlands Army. Korporaal Kevin Roggeveld was recently killed on operations in Mali in 2016. Canada along with many other countries that make up the diplomatic community in The Netherlands, attend other nations commemorative events to pay tribute to their service personnel that also lost their lives in service of their nation.

Throughout the period of the 75th Anniversary, the Canadian Embassy had planned to support over 140 events, which were grouped in clusters with multiple ceremonies occurring on the same day throughout the country. In order to support this significant undertaking, it took a whole of embassy approach consisting of members of the Canadian Armed Forces, The Royal Canadian Mounted Police, Canada Border Services Agency, Global Affairs Canada, other Canadian Diplomats, and Local Engaged Employees. As Canadian Embassy staff, we are deeply touched and immensely proud that the Dutch members of our team eagerly volunteered to represent Canada at some of these events, showing again their commitment to remembrance.

As a Canadian soldier and veteran serving in the Netherlands, it is truly extraordinary to see the breadth of the efforts to honour Canada’s fallen. It has been remarkable to appreciate: seeing the numerous Canadian flags lining the streets marking the day a city or a village was liberated, like in Apeldoorn; watching the Royal Canadian Legion (Netherlands Branch) proudly support a local commemoration with a Colour Party; reading the profile of a Canadian soldier buried in Groesbeek War Cemetery written by a Faces-to-Graves volunteer; watching a convoy of ‘Keep-Them- Rolling’ restored military vehicles with their re-enactors drive into a memorial site; listening to a Dutch volunteer talk about Canadian service members buried in Holten War Cemetery; observing an entire community come together to tell the tragic events of the fate of an aircraft like Halifax Bomber L9561 in Wons; working with a local community to make a case to identify the grave of a missing-in-action Canadian soldier such as Lieutenant John G. Kavanagh in Steenderen; and proudly standing at the closing scene of Bergen op Zoom’s theatre presentation Supersum and sing Canada’s national anthem side by side with hundreds of local citizens. It is clear that 75 years later the loss of those 5,712 Canadian soldiers, sailors, and aviators has not been in vain.

This year the COVID-19 pandemic has brought about a new reality to the May 4th and 5th commemorations and celebrations, but it has not deterred the Dutch. They refuse to be denied their 75th Anniversary party, and as a matter of fact, preparations have already begun to transform this year’s plans into ‘75+1 Years of Liberation’. The pandemic will equally not discourage Canadians as we too look forward to being there next year, side-by-side with our Dutch friends. 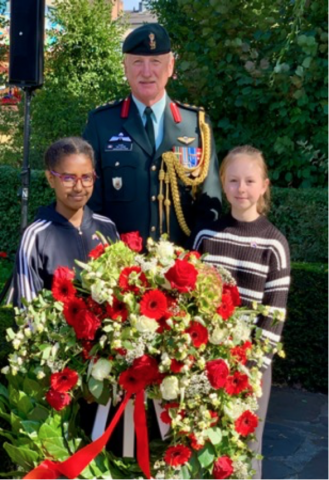 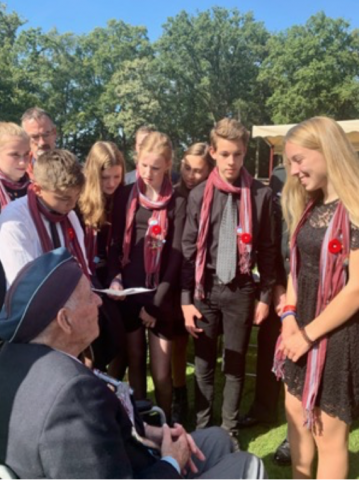 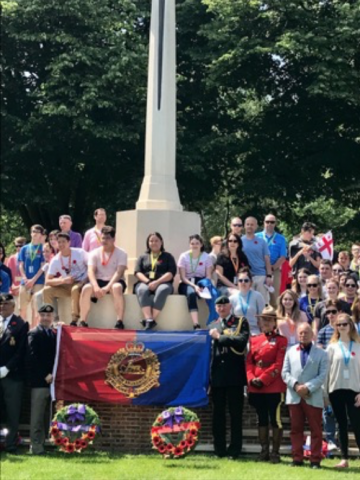 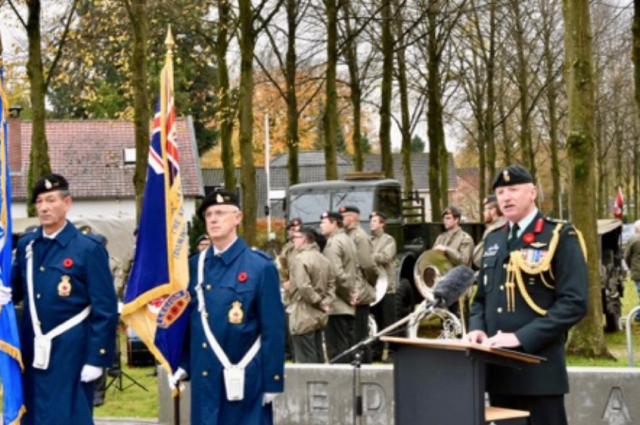 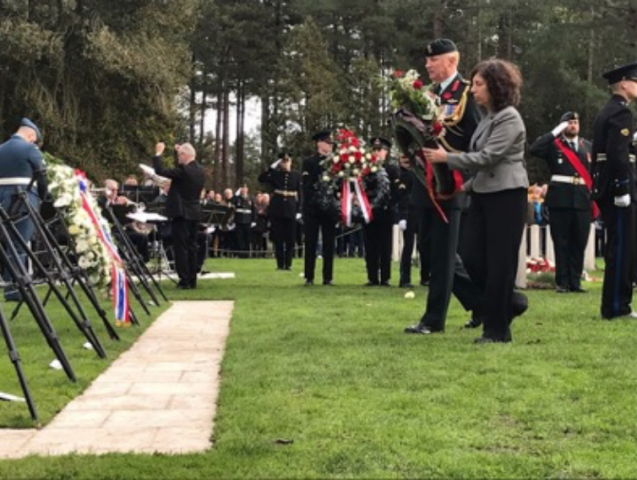