Kenneth “Ken” Owen “KO” Moore was born at Rockhaven, Saskatchewan on 11 August 1922. He was the youngest of eight children raised on a family farm. The family struggled through the Great Depression, but Ken managed to complete high school in North Battleford, Saskatchewan.

Early in the war, Ken hitchhiked to Vancouver, British Columbia. There he met Americans intent on joining the Royal Canadian Air Force (RCAF). Inspired by their desire to fight a war their country had yet to join, Ken soon found himself at the RCAF Manning Depot in Edmonton, Alberta.

Ken’s initial desire was to become an air force mechanic in anticipation of a postwar career. An officer convinced him to switch to aircrew, and Ken soon found himself training within the British Commonwealth Air Training Plan (BCATP). He graduated as a pilot and attended the general reconnaissance school in Summerside, Prince Edward Island in October and November 1942. This made him a specialist in ocean patrolling.

Ken continued training in his specialty for the first seven months of 1943. Finally, in late July, he arrived at 224 Squadron Royal Air Force (RAF) and began operations on Very Long Range (VLR) Liberator aircraft. Ken and his crew of ten flew anti-submarine and convoy escort patrols from southwest England over the mid-Atlantic, a section of water that lay beyond the range of most Allied aircraft.

For D-Day, Moore’s squadron flew “Cork” patrols, a constant effort to cover the area between southern Ireland and the Loire estuary in eastern France to protect the invasion fleet from German U-boats. On the night of 7/8 June 1944 Flying Officer Moore and his crew managed to sink two U-boats near Brest, France in just 22 minutes. For this incredible feat and in recognition of his crew’s efficiency Moore received the Distinguished Service Order and the American Silver Star.

Flying Officer Moore finished his tour of 61 missions and began instructing Liberator pilots in spring 1945. He left the air force, married, and worked at General Motors until 1947 when the RCAF asked him to return to duty. Ken served for nearly three more decades, retiring with the rank of wing commander. He was also a member of the Kiwanis community service club.

Ken Moore died on 17 January 2008 in Victoria, British Columbia. He left behind his wife of 62 years, five children, and ten grandchildren.

Canadians in the RAF

During the Second World War, Ken Moore never served in an overseas RCAF squadron. Instead, he served in an Imperial unit, containing airmen from all over the British Empire. For instance, only six members of Ken’s crew on the night of 7/8 June 1944 were Canadian. The other four were British. Other members of the squadron were from New Zealand and Australia.

Why was this the case? When Britain and its Dominions negotiated the British Commonwealth Air Training Plan in 1939, they made a provision called Article XV to form Australian, Canadian, and New Zealand squadrons overseas. Nevertheless, all graduates of the BCATP selected for overseas service entered the same pool, from which they were assigned to RAF squadrons or Article XV squadrons depending on operational needs. The result was that some 60 percent of RCAF aircrew sent overseas during the war served with RAF squadrons at one time or another.

The Canadian government under Prime Minister W. L. Mackenzie King was largely responsible for the Article XV provision. As the war progressed, Canada brought pressure on the British government to allocate Canadian personnel to RCAF squadrons under Article XV. This process became known as “Canadianization”. By 6 June 1944, the 60 percent figure had dropped substantially.

Coastal Command was one of four operational Royal Air Force commands in the United Kingdom in 1944 (along with Fighter Command, Bomber Command, and Transport Command). Its primary responsibility was the maritime air defence of the British Isles and the protection of Allied convoys from German U-boats and long-range coastal aircraft. This defensive role was critical, both to keeping Britain’s war economy functioning and in building up the overall Allied force necessary to invade Nazi-occupied France. Coastal Command also had an offensive capability, striking German warships and merchant vessels.

For D-Day, the presence of German U-boat bases along the French coast posed a substantial threat to the invasion fleet and the effort to supply Allied forces in Normandy across the English Channel. Ken Moore’s squadron played an important role in efforts to deter and prevent U-boat activities in the invasion area. They flew “Cork” patrols to provide continuous air coverage of likely U-boat routes. At the very least, these patrols would discourage U-boats from sailing on the surface during day or night. The B-24 Liberator crews had onboard radar to help with scanning for U-boats on the surface or at periscope depth, especially at night.

Sinking a U-boat from the air was a difficult task. Furthermore, as Moore alluded to in his interview, confirmation of a sinking was also difficult since the aircraft could not loiter in the engagement area for an extended period. Evidence from German sources suggests that Moore’s crew probably only sank one U-boat on 7/8 June 1944. Nevertheless, attacks on U-boats could result in damage, increasing the danger for German sailors, or force the U-boat to submerge. Underwater U-boats typically posed a reduced danger to Allied surface vessels. 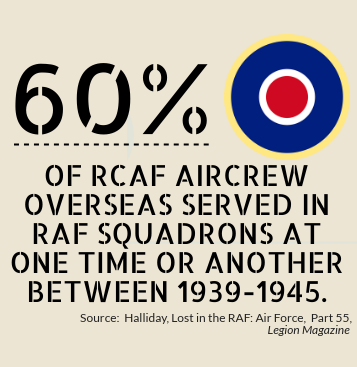 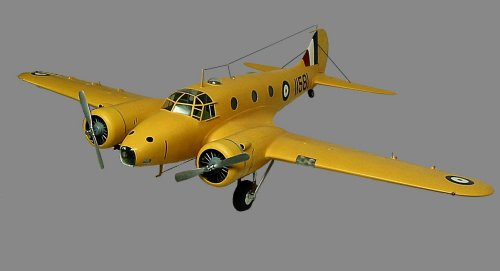 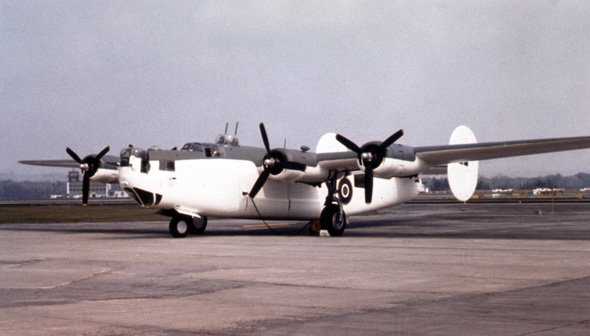 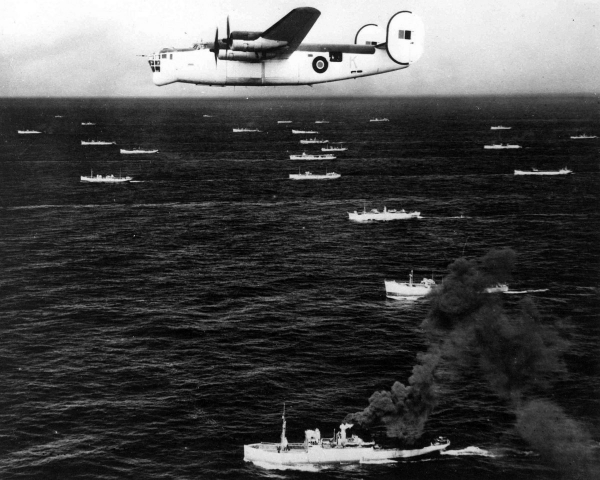 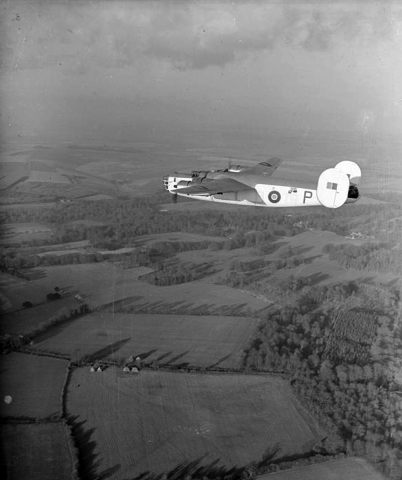 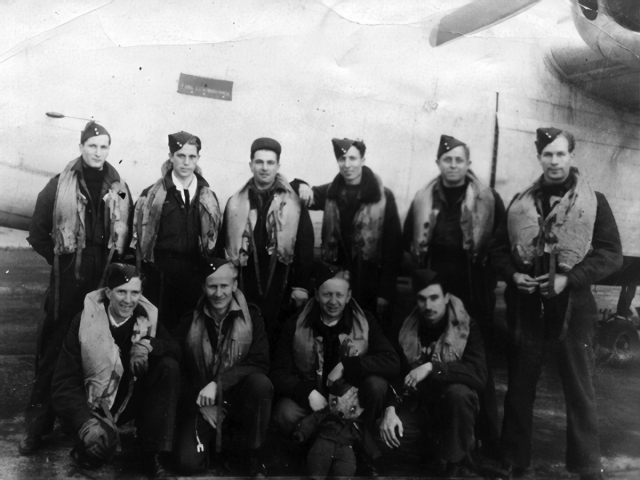 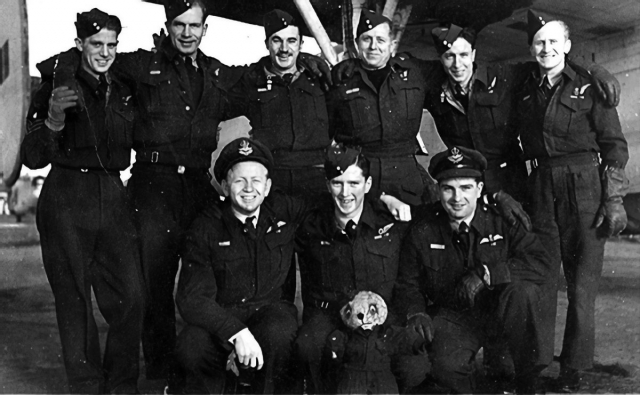 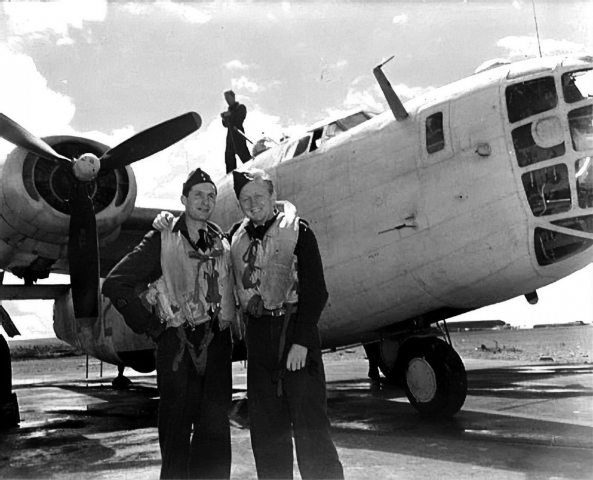 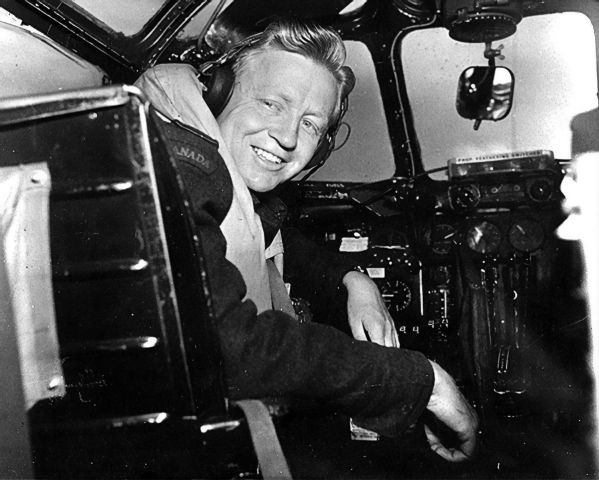 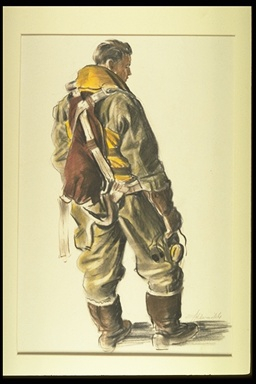 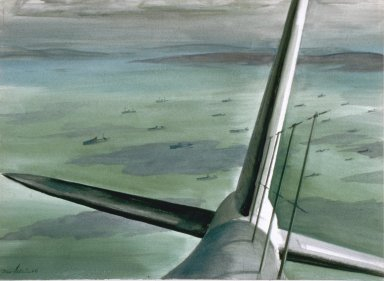 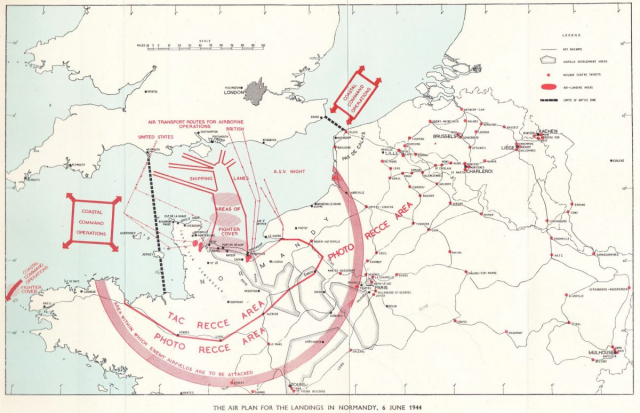 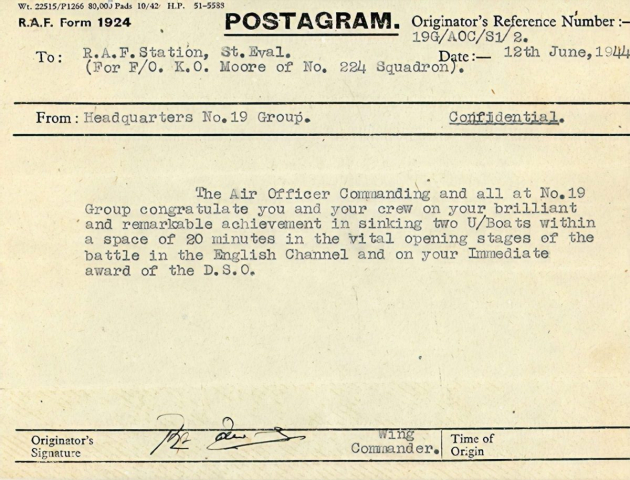